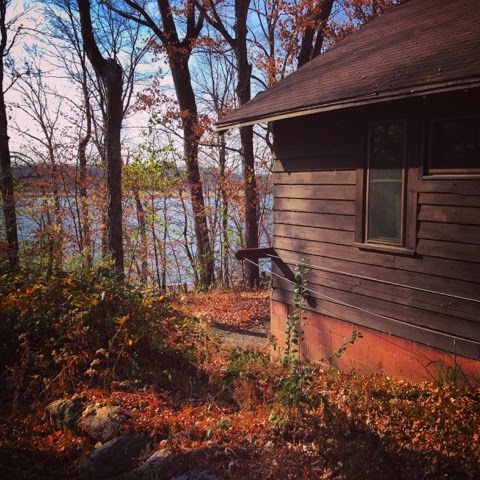 This is a total bounce off post from Carla Birnberg's post.  She really got me thinking and, as happens so often with her blurbs, when I start to think of a comment to leave it turns into something much bigger and grander.  Something that often turns into a blog post of my own.  I've been having a rough month or 2 or 3 as some of you know, and I wanted a way to talk about it and also move forward from it. Carla did just that for me.  Thanks, you're the best!

The end of summer/beginning of autumn brought with it a lot of change and chaos.  My boyfriend at the time, who I was living with and had been trying to break up with all summer, gave me an unintentional black eye, we broke up, I quit my jobs, packed up our apartment, moved back home with my parents in CT, cried a lot, ate a lot of chocolate, lost weight, gained weight, started talking to a psychologist, which I highly recommend, was told I have mild PTSD and am dealing with flashbacks, a friend from Camp died unexpectedly as I was moving back to Chicago, moved back to Chicago after rerouting North to attend his service, and now I'm here and the leaves are almost all gone.

I feel like the trees in a lot of ways, stripped bare of my former glory, little to no protection.  I cry easily and am often seen jumping from the smallest noises or movements.  But I also feel like those trees in a different way, like I am shedding that which does not serve me anymore.

After my tumultuous last few months, it is a relief to feel the season shifting. The letting go of the old, that which once gave us life and energy but has become a burden, and embracing the sterility, the clean slate, provided by the winter.  Thus, providing the idea, the symbol, of being able to grow something fresh and new and more beautiful this next time around.  I can look back and ask "why?" and see the answers better. The air is clearer in the cold, and it's easier to look back and understand the whys and hows.

My good friend Laura and I were talking about how Fall is a time of death.  It is when life returns to the earth after the warmth and security of summer to avoid the stifling coldness of winter.  It is a time when animals, and many people, migrate south, migrate away.  Leave.  And those of us who are left are a little more bare and, at the end of winter, a little worse for wear.  But, with that bareness and loneliness we have the opportunity to decide how to grow internally, as winter is iconically an internal season.  For me, I am shedding my fears this autumn. I have faced many of them and am learning to let them go now. I am learning to be increasingly true to myself without hesitation.

The man who died, his name is Abe or Ryan depending how you knew him, was so unabashedly and COMPLETELY unapologetically himself in every way it's mind boggling, but I respect him so much for that and can actively learn from the example he set.  I only saw a snibbit of his living life, but have seen so much more of it since he passed because of all the stories people have shared.  He is a legend, and an example to strive toward.  He has been a slap in the face for me to stop being afraid to really live my life and an incentive to really show my love for the people I care for.

I can feel my roots digging deeper into the ground, stabilizing me in a way only a rough year can, and when my leaves are ready to bloom again, though it will take a while, they will be grander, greener, and more glorious than before.
Posted by Lia at 12:18 PM

Hi Lia. I just came from Carla's blog. Your words here speak of hope, renewal and strength. As for trees, they are one of my favorite things in nature. There is a special beauty in them to be appreciated, no matter the season.

Trees have a lot to say don't they? I'm glad you felt what I felt writing this!

this is a beautiful peace. trees are the rifgt analogy to what you went through. Love you baby

what a beautiful post. thank you for sharing your truth :)

Hi, I'm Lia a connoisseur of life experiences and this is where I share my stories! This blog is about living a-typically to find wellness and adventures in all aspects of life.